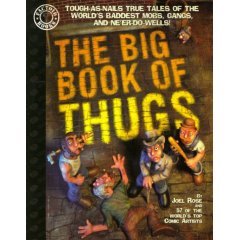 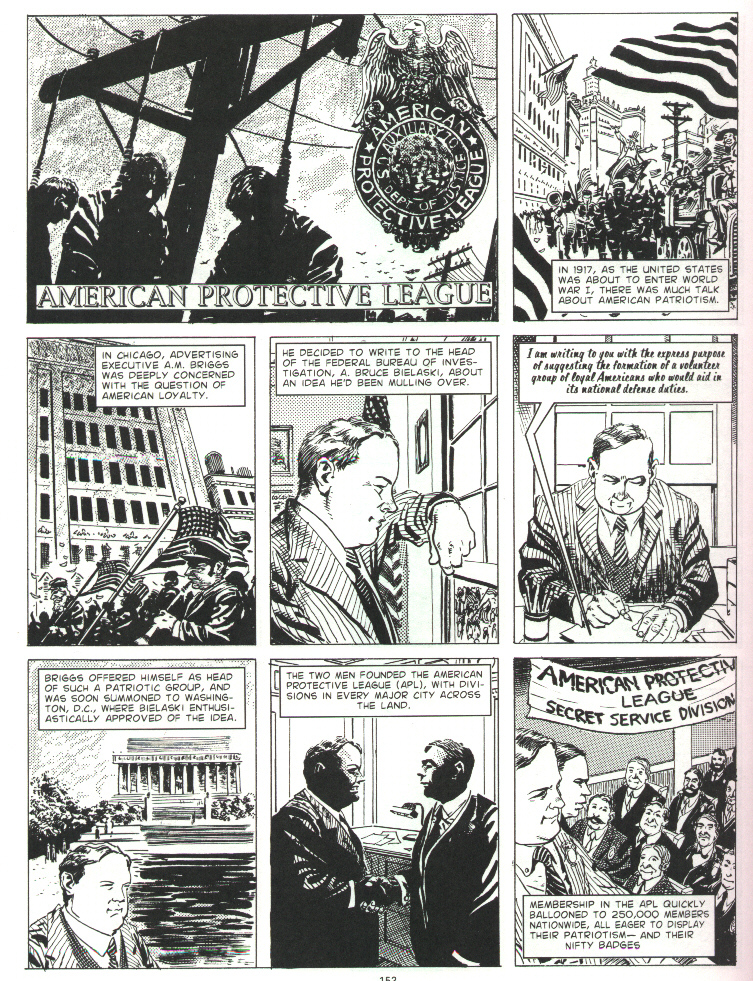 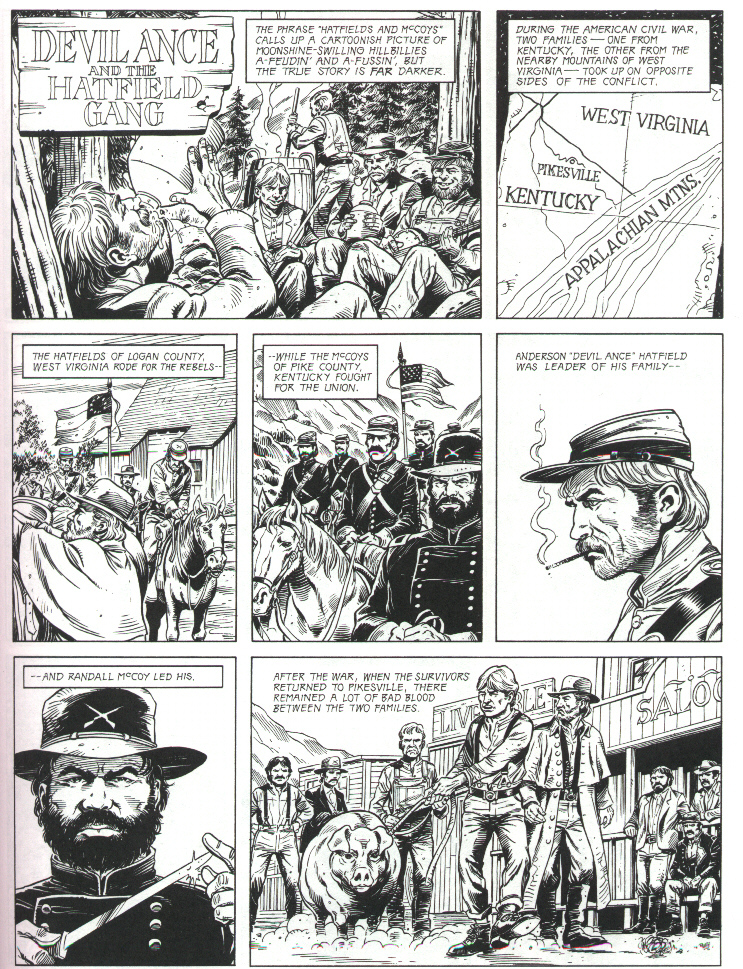 The Big Book of Thugs

Cons
Only someone with a truly morbid sense of humor could call it a necessity.

The Bottom Line
In this Paradox Press offering, the reader gets to meet all kinds of evil, greedy, and just plain mean SOB's. In comic form, of course.


Full Review
Bad guys sure do come in all shapes and sizes, don't they? The low men on the totem pole of criminal behavior would be pickpockets, phone solicitors, and others who are really more of a nuisance than an overt threat to one's existence. As you move up the ladder, you get to some really awful characters such as serial killers, mass murderers, Texans, and people who tried to break the high score on "Whackman" by assembling extermination squads and setting up concentration camps. The world is full of awful men, and the women who love to have sex with 'em.

If you want to learn about some impressively evil dudes that got together with other evil dudes, then get yourself a copy of "The Big Book of Thugs". Part of Paradox Press' "Factoid Books" series (other volumes include the Big Books of Death, Weirdos, Freaks, Martyrs, Urban Legends, and the 70's, to name more than a few), this insanely fascinating trade paperback assembles fifty-seven professional artists (mostly of the comic book/graphic novel variety, not Impressionist painters) and a writer named Joel Rose to educate the public on some of the lesser-known scumbags to grace the stage of history.

The word "Thug" (as illustrated in the beginning of the book) is actually a reference to a group of assassins that strangled and stabbed as many as two million people from about the mid-1500's until the hanging of the last "Thuggee" by the British in 1882. Since then, we've tossed the word "thug" at any number of perceived malefactors, and I use it regularly as a synonym for "adolescent". And who'd really be surprised to find that kids these days are stabbing out the eyes of wayfarers in the name of the goddess Kali?

After being introduced to the real deal in the world of Thuggery, we proceed to encounter every manner of good-for-nothings, cold-blooded killers, and guys that may have meant well but took it all too far. Most (but not all) are drawn from the sordid pages of that horror novel known as "American History", and are conveniently grouped into the following six categories: "Street Gangs", "Early Americans", "Pirates, River Rats, & Railroad Robbers", "Wild, Wild West", "Vigilantes", and "Political Gangs". I would've torn straight across the line of political correctness and included chapters on "White Folks That Oughta Have Their Heads Lopped Off" and "Minorities That Make Me Want To Burn Our Cities Down".

The drawings, regardless of which artist is responsible, are as top-notch as you'd expect the work of professionals to be. It's amazing what some folks can do with a little ink and paper. Many of the artists chose to cast their subjects in a humorous light (not an unwelcome move, considering the grimness of the topics), while others went all out in their serious and detailed depictions of people getting bludgeoned, shot full of holes, stomped to death, and hung. Thumbing through the "BBOT" might fool you into thinking that it's something for the kids, but protective parents would probably not want their lambs exposed to images of severed heads and jars of pickled human ears. There, you're warned.

I'm not about to list the dozens of gangs, posses, mobs, and bands of ne'er-do-wells that stalk this volume, but I will share with you a few of the friendly faces you'll encounter in the nearly two-hundred pages of "The Big Book of Thugs":

THE SWAMP ANGELS: a group of thieves that stole cargo from the East Side Docks of NYC, then hid it away in the rat-infested tunnels beneath the slums of Gotham Court

PLUG UGLIES: New York toughs of the 1800's who wore tall hats and beat their opponents senseless with bricks and clubs

THE STRANGLERS: vigilantes hired to clear Montana of cattle rustlers- which they did, with the purchase of a few good ropes

THE REYNOLDS GANG: some Texas ruffians who robbed their way around Colorado until apprehended and shot to ribbons by truly ruthless thugs- the U.S. Army

There are many, many more scoundrels awaiting your discovery inside the "Big Book of Thugs". It's a sometimes hilarious item that almost makes robbin' and terrorizin' law-abiding folk seem like fun and adventurous pastimes. Until, of course, you get to the last frame of whatever section you're reading and realize that the black ink taking up half the box is the blood of a gunned-down hooligan who ought to have left the game while the gettin' was good.