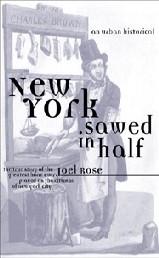 New York Sawed in Half

In 1824, the inhabitants of New York City were just returning from the wilds of Greenwich Village after having fled a yellow fever epidemic that threatened to devastate the population of 150,000. The recent economic depression forced many of the city’s laborers out of work. It was a time of extreme gullibility, a time when newspapers began to realize that sensation sold, truth or lies, giving way to a rash of hoaxes.

So when two men of supposed high reputation began a rumor that Manhattan was sinking into the harbor because of overdevelopment on its southern tip, everyone listened closely. The men had been sent, they claimed, to save Manhattan from inevitable doom. Their idea: to saw New York in half, drag it out to sea, turn it around and reattach it to the mainland at Kingsbridge. Far fetched? Not at the time when a river was being forged through the mountains to create the Erie Canal. The wonders of engineering made anything possible. And so begins the story of the greatest hoax ever played on the people of New York City.

"Rose writes with a strong sure style that never strains."

--L.A. Weekly
"Rose illuminates and startles."
--Village Voice
"Joel Rose's suspenseful saga relives the greatest hoax ever recorded in New York City history."
--Vanity Fair
"On a summer day in the eighteen-twenties, two men brought startling news to New York City's Centre Market. Manhattan, they announced, was sinking. The men explained that the mayor had sanctioned an emergency plan to saw off the bottom half of the island, drag it out into the harbor, turn it head to toe, and reattach it. Joel Rose's semi-fictional re-creation of the hoax reflects on the peculiar complicity that exists between the duper and the duped."
--The New Yorker
"Sure to get people talking big-time!"
--Gotham Magazine