I grew up in New York, but was born in L.A. My father worked as a waiter, first at the Stage Deli and later at the Carnegie, and starting as a teen-ager and later as a young man, I worked as a busboy and waiter in many, many restaurants around the city. I received a B.A. in Literature from Hobart College and an MFA from Columbia University's School of the Arts. One day, soon after I got my degree from Columbia my father took me aside and said to me: "I didn't work this hard, you didn't work this hard, for you to be a waiter. If you want to be a writer, be a writer." I stumbled into a job as assistant to Leonard Kanter, writer for the television show Kojak. A few years later after doing my time with Leonard, working on MacMillan and Wife, Cat and Mouse, James at 15, and a slew of others, my first daughter was born, and I moved back to the Lower East Side neighborhood, to the same street, the same block, where my mother was born and raised. It was during those years that I had the opportunity to work on Miami Vice with my dear, departed friend and neighbor, the brilliant Nuyorican poet and playwright, Miguel Pinero, and was inspired to write my first novel, Kill the Poor (1988).

The Blackest Bird (2007), has been translated into thirteen languages.

Kill Kill Faster Faster (1998) has been praised and maligned as both the best and worst novel ever written.

Other works include the graphic novel La Pacifica (1995), written with No Wave film director Amos Poe, and the urban historical, New York Sawed in Half (2001).

Anthony Bourdain and I wrote Get Jiro! for DC Comics/Vertigo. Art work was drawn by the immensely talented Langdon Foss. The prequel, Get Jiro!: Blood and Sushi was published in 2015 with Art by Ale Garza.

For a few years, way back when, after I sold La Pacifica and wrote the script, I was offered a job and worked at DC Comics, editing their line of mystery novels at Paradox Press, including History of Violence, Green Candles, Hunter's Heart, and Road to Perdition. I also wrote the Big Book of Thugs, and parts of the Big Book of Little Criminals for Paradox.

Kill the Poor was one of the first films shown at the first Tribeca Film Festival.

With Catherine Texier, I established and edited the literary magazine Between C&D.

Ang Lee and I worked together fruitlessly for many years.

I have four kids, two girls and two boys, a Staffordshire Bull Terrier, named Vince, and two really great Martin guitars which I love dearly, but have been coopted by my son. My family and I live in New York City and on the Jersey shore and when possible (when school's out for the boys) in Guiones, Nosara, Costa Rica. Pura vida!

I have done my share of journalism, although, despite what Wikipedia has to say, I am no journalist. In the past I have written frequently for the New York Times and Marie Claire magazine, New York Magazine, Details, Black Book, Bomb, U.S. Hispanic Affairs, Ici New York. Probably many more I no longer remember. Sad. 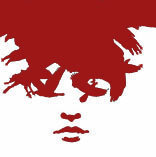 Click here to read Treading the Darkest Paths: An Interview with Joel Rose by Mark Vanner