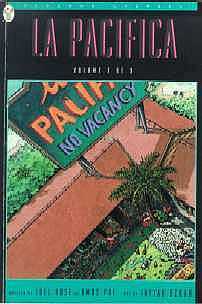 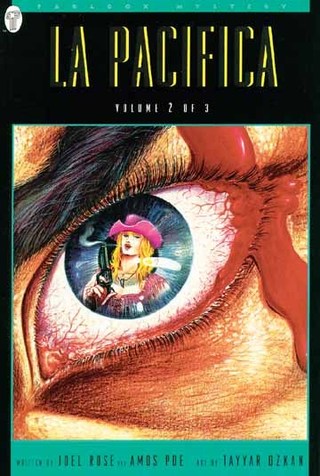 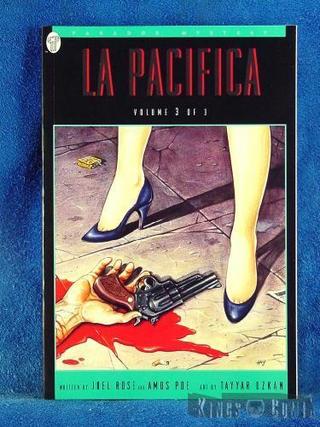 "The writing is crisp, the art grim. What a movie this would make!" -- Flux Magazine 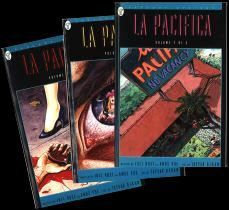 The No Wave Noir of La Pacifica

This pioneering graphic novel mystery blends hard-boiled genre conventions with punk and transgressive aesthetics, resulting in a lost classic of the 1990s. 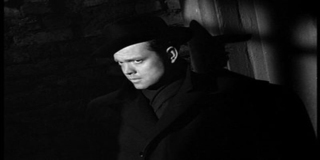 Call her Holly Stone. Haley Desmond or Hazel Clemenza, she goes by many names. Call her Molly. Men kill for her.

Don Cooper owns a beautiful little motel called La Pacifica, on the coast. One day, a brutal and seemingly random act of violence takes place at his motel, and afterwards, Don feels compelled to find out why it happened. His search leads him across the United States, on a trail of men turned into killers.

“I’ve been following a trail of corpses of your ex-boyfriends and their victims, asking myself the same question: Why?” Cooper asks the mysterious femme fatale, when they finally meet. “You’ve got a powerful influence on men, sweetheart. Was it them or was it you? I don’t know what to think.”

The first book in the 1990s Paradox Mystery line, La Pacifica was published in three volumes between 1994 and 1995. It stands as an intriguing experiment and blending of styles, and (as it appears to have fallen out of print) it could be considered a lost classic.


It brings to mind several hard-boiled and noir classics. The delayed entrance of the femme fatale in La Pacifica (even though everyone in the story talks about her) recalls Harry Lime’s entrance in The Third Man, while Cooper’s words to Holly/Haley/Hazel/Molly echo those of Raymond Chandler’s Phillip Marlowe, describing the femme fatale Mildred Haviland in Lady in the Lake: “She got men that way, she could make them jump through hoops. I didn’t know her long enough to see why, but her record proves it.”

Written by Joel Rose and Amos Poe, and featuring extraordinary black and white art by Tayyar Ozkan, La Pacifica‘s femme fatale is so mysterious and deadly she might be an incarnation of death itself. Or not. One of the most interesting aspects of La Pacifica is how it plays with the conventions of the crime genre, especially a device as fundamental as the femme fatale. 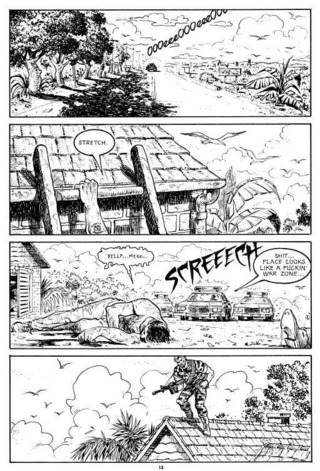 Even though the book was co-written, it’s tempting to draw connections in this regard to Poe’s background as a legendary indie filmmaker, specifically to his role as one of the founders of the No Wave movement in film. His classic works include 1976’s The Blank Generation and 1978’s The Foreigner.

“No Wave was a collaborative effort by artists, musicians and filmmakers to strip their media of all ornament, commerce and convention and break the bonds of ‘genre,’” writes Grey Daises on the film website mubi.com. “Filmmakers used whatever equipment they could find, borrow or steal to create fast and dirty films that challenged and confronted their audiences with images of violence, boredom and confusion.”


La Pacifica features more than it’s fair share of violence and confusion, and there’s a fascinating interplay between the creators’ palpable desire to “break the bonds of genre” while telling a story set firmly within the boundaries and conventions of a specific genre.

Rose and Poe seem to do this is through the ambiguity of the femme fatale’s power (“Was it them or was it you? I don’t know what to think.”), and the emphasis on texture and feeling over direct explanation. The ambiguity extends beyond the question of why men killed and died for the femme fatale, but also to Don Cooper’s motivation for finding her.

It’s clear that he grows increasingly desperate as the story progresses. There are hints that he could be envious of her victims, of the love they felt and received. Or, he could be shocked by the violence and mystery. Perhaps he understands that she’s a force of evil, and he feels the impulse to eradicate her. Or maybe he views her power as an affront (to patriarchal power structures, to humanity, to his morality: take your pick). By the end of the story, some answers are given, but the overall question remains: “Why?”


Rose and Poe also seem to draw No Wave’s sense of nihilism into their story, key to which is the link Cooper feels, as a fellow Vietnam vet, to the man who shoots up the motel at the start of the book. As Lydia Lunch says in Marc Masters’ book, No Wave (excerpted on pitchfork.com): “Nihilistic? The whole fucking country was nihilistic. What did we come out of? The lie of the Summer of Love into Charles Manson and the Vietnam War. Where is the positivity? I’m supposed to be fucking positive? Fuck you! You want positive, go elsewhere. Go find a different lie.”

La Pacifica also draws a connection to the Cinema of Transgression, a spawn of No Wave. For example, besides the violence, ambiguous morality and nihilism, there are details such as the suggestion that Don and his girlfriend Libby might also be cousins, an odd detail that’s highlighted, then seemingly discarded.

Leaving the world of La Pacifica, full of sin and blood, love and hate, the words of Nick Zedd’s “Cinema of Transgression Manifesto” (featured on ubu.com) come to mind: “We violate the command and law that we bore audiences to death in rituals of circumlocution and propose to break all the taboos of our age by sinning as much as possible. There will be blood, shame, pain and ecstasy, the likes of which no one has yet imagined. None shall emerge unscathed.”

Borderland Speakeasy #14: The No Wave Noir of La Pacifica/